At Quadrangle, we balance creative innovation with in-depth expertise to solve business challenges – and build lasting partnerships. We collaborate with high-profile clients in media, hospitality, retail and other sectors, as well as developers of multi-unit residential projects.

Our Toronto-based firm includes recognized leaders in areas such as accessibility and sustainable design, as well as experts in technically demanding industries such as Content Media. Over the years, our work has earned acclaim and won many Canadian and international awards.

That recognition is gratifying, but what we value most is the strength it adds to existing relationships and the doors it opens to new ones. Maintaining our focus comes down (as usual) to four simple rules:

And, most important, never stop evolving – as we keep pace with the changing world where our clients grow businesses, build communities and create new opportunities. 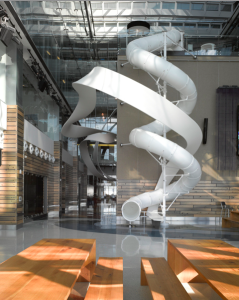 Corus Entertainment has brought together its various TV, radio and office locations into one standard-setting facility on Toronto’s waterfront: Corus Quay.

In designing the tenant fit-out, Quadrangle had to meet exacting studio and production specs while reflecting the company’s unique vision and culture.

The welcoming ground floor includes performance studios opening onto a beach, while the workspaces above are similarly open, admitting plenty of natural light. 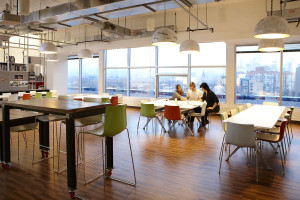 Having outgrown the original Quadrangle studio, created in 1986 for our pioneering move to Toronto’s garment district, we wanted once again to demonstrate leadership while showcasing three core strengths:

Our search led us to the seventh floor of a 1990s building just west of downtown, close to the highway and well served by public transit.

Quadrangle’s new open-concept studio is filled with light, thanks to perimeter windows and glazed meeting rooms, plus a supplementary system with motion and daylight sensing.

The highly sustainable design repurposes artifacts such as drawings (now part of pendant light fixtures) and seamlessly integrates a wide range of universal design features that go well beyond code.

Every element is an opportunity to show our values in action while supporting the building owners’ efforts to attract other creative enterprises. 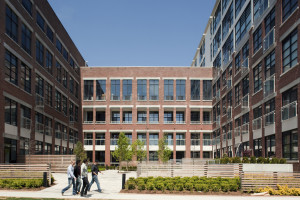 The former manufacturing facility, which dates from the early 20th century, is in an industrial zone west of downtown that has undergone a dramatic revitalization as Liberty Village.

The owners of the site – adjacent to several recent residential and retail developments – wanted to preserve the factory’s unique attributes while expanding it to house a combination of live/work units and commercial office space.

Live/work units were created in a three storey addition and also incorporated into an existing five storey section (while retaining its office spaces). At the same time, the sections in poorest shape were demolished and rebuilt to accommodate three floors of live/work units, as well as four levels of parking above grade. 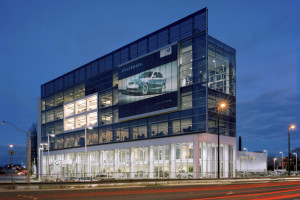 The challenge: Reinvent a 1950s office building to create a uniquely visible showroom – and express the sophisticated design sensibility of a legendary car company.

After collaborating with BMW Canada on its head office expansion and the BMW Experience Centre in suburban Toronto, Quadrangle was asked to create the company’s flagship showroom – by transforming a 1950s office building in the heart of the city.

Taking advantage of dramatic views from the nearby Don Valley Parkway, the Quadrangle team created a modernist glass-clad showcase embodying the spirit of bold, elegant design that has always distinguished BMW.

The original building was demolished down to its frame and reinforced to meet current earthquake standards. The new structure, glazed on three sides, is punctuated with vehicle display bays and a projecting, backlit billboard – effectively integrating architecture and communications.

The building includes a two storey service wing, as well as a fifth floor delivery area where clients take delivery of their new vehicles against the panoramic backdrop of the downtown skyline.

BMW Toronto has been recognized by an Ontario Association of Architects Award of Excellence and a Toronto Urban Design Award.